My “volunteering with wild cats” adventure

After receiving quite a few questions about my trip to South Africa, I decided to write another blog about my volunteering work I did for two weeks in Bloemfontein.

I’ve been wanting to “work” with wild cats for the longest time. Lions are the most magnificent animals and being able to be up close to them, other than staring at them while they’re living their miserable lives in a zoo, has been a dream for as long as I can remember. So in September of 2013 I did some research on whether this was possible and where. I eventually came across a video on YouTube from a girl who volunteered at this place called “Cheetah Experience“. I googled their website & Facebook page and I was convinced. So I ended up e-mailing them for more details on their volunteer program. I was very excited because of their answers & fast responses so I ended up booking the trip, a couple months later, in December of the same year.

I booked my flight about four months in advance (I went to Africa in March of 2014) with KLM Airlines. There was a direct, international flight available from Amsterdam to Johannesburg. The flight was around €500 if I’m correct, which isn’t too bad at all considering it was an 11-hour flight. Johannesburg wasn’t my last stop. I eventually had to get to Bloemfontein, which is about an hour flight away from the major city, 3 hours if you drive their. But considering it was my first time in South Africa I had no interest in sitting on a bus in a relatively “un-safe” country for a couple hours. I booked my flight with South African Airways.

When arrived in Bloemfontein someone from Cheetah Experience picked me and my cousin up (she decided to tag alone). The airport was +- 30 minutes away from the sanctuary.

We stayed at the volunteer house (included in the price you’d pay to go there) which was a 2/3 minute ride from the sanctuary. Breakfast & lunch was served daily and you’d be taken to the supermarket twice a week to buy dinner & other things you’d like. The cost price for two weeks there was around €500. However I don’t know the exact prices for 2015.

Arriving at Bloemfontein and being surrounded by cheetahs, lions, leopards, wolves and more animals was the most incredible feeling. My cousin (Shana) and I were welcomed by the staff members & other volunteers from all around the world. (Most) of them were very welcoming and they immediately explained to us what we’d be doing over the course of two weeks while we were there. All the chores were divided into two groups: the lion-side & the cheetah-side. You’d work on one side one week & the other side the next. The lion-side meant you’d work with/for the leopards, lions, wolves, caracals & servals. Working on the cheetah side meant, well, working with & for the cheetahs.

Duties included, but not limited to, cleaning poop (wolf poop SMELLS SO BAD and they poop.. A LOT, like A LOT), checking the fences, feeding the animals, checking whether all the animals appear to be healthy, guide tours, work at the curio shop and more.

On a regular day you’d have from 12 to 2 off, unless you’d have to guide a tour during lunch time. When there are a lot of volunteers (full capacity at the volunteer house) you’d have more free time compared to when there aren’t that many. Free time means you can interact with the animals (wolves, the tame cheetahs and the smaller animals), read a book, relax, do whatever you feel like doing. Interacting is only allowed when you feel comfortable AND when the animals feel comfortable around you. Most of the animals were brought up in captivity (please don’t confuse this with a zoo, because it is very different) so they are pretty tame, but they maintain wild animals.

Now that I just mentioned it I’d like to explain the differences between a regular zoo and a sanctuary, or Cheetah Experience in this case. The animals live in a much, much bigger area. Most, or a lot, of them are rescued. At a zoo the animal gets food and that’s pretty much it. At Cheetah Experience the volunteers & staff members try to make sure the animals don’t get bored, still try to let them use all their senses, enrich the animals (almost on a daily basis) and more.

Back to the volunteering. (I’m so sorry this story is so long) Day in day out you’d wake up when the sun comes up, which is pretty epic, and the first thing you hear are the lions roaring. I can guarantee you, there’s no better way to wake up. We’d start our day, work long hours and we’d get the chance to get to know the animals a little bit more. I especially enjoyed spending time with the wolves. Wolves are obviously a lot like dogs, but I consider them to be even more loyal, more trustworthy. You know how a dog knows when something’s wrong? A wolf does too. It takes quite a while before a wolf gets used to you and ‘accepts’ you. At Cheetah Experience you have to get accepted by Shakira, the alpha wolf, before you can spend time with them. How can you get accepted? She must lick your face. That way you know she feels comfortable around you. She can sense when you’re afraid, she can sense when you disrespect her. I loved spending my lunch break with them. They have a little ‘house’ they can climb on and I would go on there, bring a book and the two wolves would often join me. 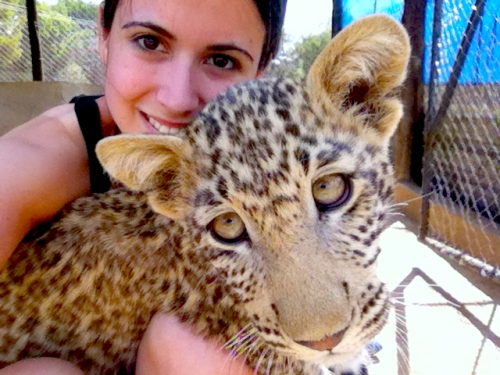 Two weeks was too short now that I look back at it, but those two weeks were some of my favorite weeks in my entire life.

Have you ever volunteered (with animals) before? Would you want to do something like this one day?

Please feel free to ask me any more questions in case you have ’em! Wanna read more about this incredible experience? Check out the Bloemfontein/South Africa category! And for more photos click on the Africa tab.

38 responses to “My “volunteering with wild cats” adventure”